Each day more informal groups are intervening in the policies and the landscape of Brazilian cities. In São Paulo, the biggest metropole in South America, a subtle revolution is taking place.

The experience of Praça da Nascente

On an uncharacteristic torrid Saturday in April with temperatures in the mid 90s, I arrived at Praça Homero Silva, now known as Praça da Nascente. I don’t remember seeing that place (at the corner of Pompeia Avenue and André Casado St) before. Maybe I saw it, but did so without really seeing it. Probably, until the square was rehabbed, most people, just like me, did the same.

Until 2013, this large green area in an urban, middle class neighborhood, not too far from São Paulo’s center, was a degraded square, abandoned by everyone, including the city administration. It is a unique space with different levels, following the hilly geography of the area. Due to this feature, depending on where you are inside the square, it is easy to forget that you are surrounded by asphalt and traffic.

On that Saturday members of Ocupe e Abrace and other groups (known here as coletivos) were responding to a call to action on Facebook and were working in a mutirão (joint effort) to clean a special spot inside the square, a little lake and its surroundings. Ocupe e Abrace (literally Occupy and Embrace) is one of the many coletivos in recent years in São Paulo. Its members rehabbed the whole area of this square three years ago. In the process, they found many water springs, a remnant of Agua Preta, a local river nowadays mostly covered up. From these water sources they were able to create the little lake, which now shelters red fish, aquatic plants and invites kids to cool down in this never ending summer. To honor the micro springs they found, they renamed the square: Praça das Nascentes. They come back here often to care for the square and to enjoy its cool space. This time, they are here on a mission, after a group vandalized the lake, plants and fish.

The achievement of Ocupe e Abrace is both the result of neighbors from the park, who decided to act to recover it as a public space, and an initiative promoted by a collaborative online platform called Cidade Democrática. Their aim is to bring together ordinary citizens and organized groups, official or not, interested in developing a project of city intervention. 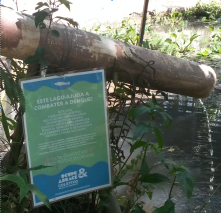 After working hard and returning the space to the city’s inhabitants, Ocupe e Abrace inspired similar initiatives around the city and are often called to speak at schools about their experience. Thanks also to their work, besides the new recovered space, and rediscovered water sources, this square now hosts a permanent, natural installation by artist Daniel Caballero, who researched the original vegetation of the area, actually a cerrado (a type of savannah), and was able to recreate a sample of it, bringing back to the park many of those species. In order to collect material and conduct research, he created along the way another coletivo, called Cerrado Infinito. This is why people visiting Praça da Nascente can also learn about the original herbs,flowers, bushes and plants, which, at some point, covered that part of São Paulo. One can find all this explained on a plaque, where a little path was also created to facilitate the exploration. According to Andrea Pesek, one of the most active members of Ocupe e Abrace, it was not the first time that someone had attacked the little lake and park. However, when I talked to her, as she stood alongside a small group of people working the land, she was far from discouraged: “No matter how many times they attack the park we’ll be back here to protect it”. Asked about what changed in these three years since the project took place, besides the visible landscape improvement, Pesek emphasized that transformations happened at an incredible rate. “We learned a lot. I see myself so changed today that I hardly recognize who I was before Praça da Nascente. We are like a flow. We got in this powerful harmony with nature and created the city we wanted.” For her, there is a symbolic connection between the actions of the group and the fact they recovered water that was prevented to flow freely: “When we freed the waters, honoring the springs, the rivers and all the creatures, everything else flowed too: our togetherness, creativity, love, trust”.

Protecting the park on that hot day, there were members of different groups from near and far neighborhoods. What one can conclude is that these groups, even though they start for different reasons and have local particularities, end up being connected. “People are able to create egregores of protection and regeneration when they come together in respect and peace, replacing competition for collaboration”, believes Pesek. Since we are living a particularly hard moment of intolerance in Brazil, her Zen approach is refreshing. Nevertheless, she is aware of the challenges: “There is much learning ahead of us. This is a time of small but potent, gentle revolutions, which are woven by the little gaps, with a new kind of collective intelligence, a possible world,” she continues. “A viable world that stands against not just these small attacks but also against monstrosities like Belo Monte (the Brazilian Hydroelectric dam), the genocide of indigenous peoples, the unpunished killing of Rio Doce (the river contaminated by mining chemicals in the worst environmental accident in Brazilian history) and all sort of ways to which our society seems to anesthetize itself, ignoring atrocities perpetrated against nature and the sacred peoples. On this uncertain rope, we balance ourselves,” she adds and concludes: “All we can do is resist”.

According to Pops Lopes, photographer and environmental activist, who was there dedicating her time to maintain Praça da Nascente on that day, all the creatures were thankful afterward for the group’s hard work. Seeing below the beautiful images she captured, it is hard to disagree. Note: We’ll continue talking about the coletivos and their impact on city life. Come back for more and let us know if there is any similar activism in your city. Despite that the content of this article is essentially the same as the original in Portuguese, this text is a version, not a literal translation, of the former.

2 comentários em “Coletivos and the cities”